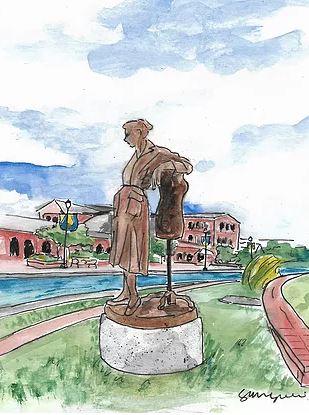 Rendering of the Claire McCardell statue by Sarah Hempel Irani, the award-winning sculptor and Frederick Art Club member commissioned to create the sculpture. 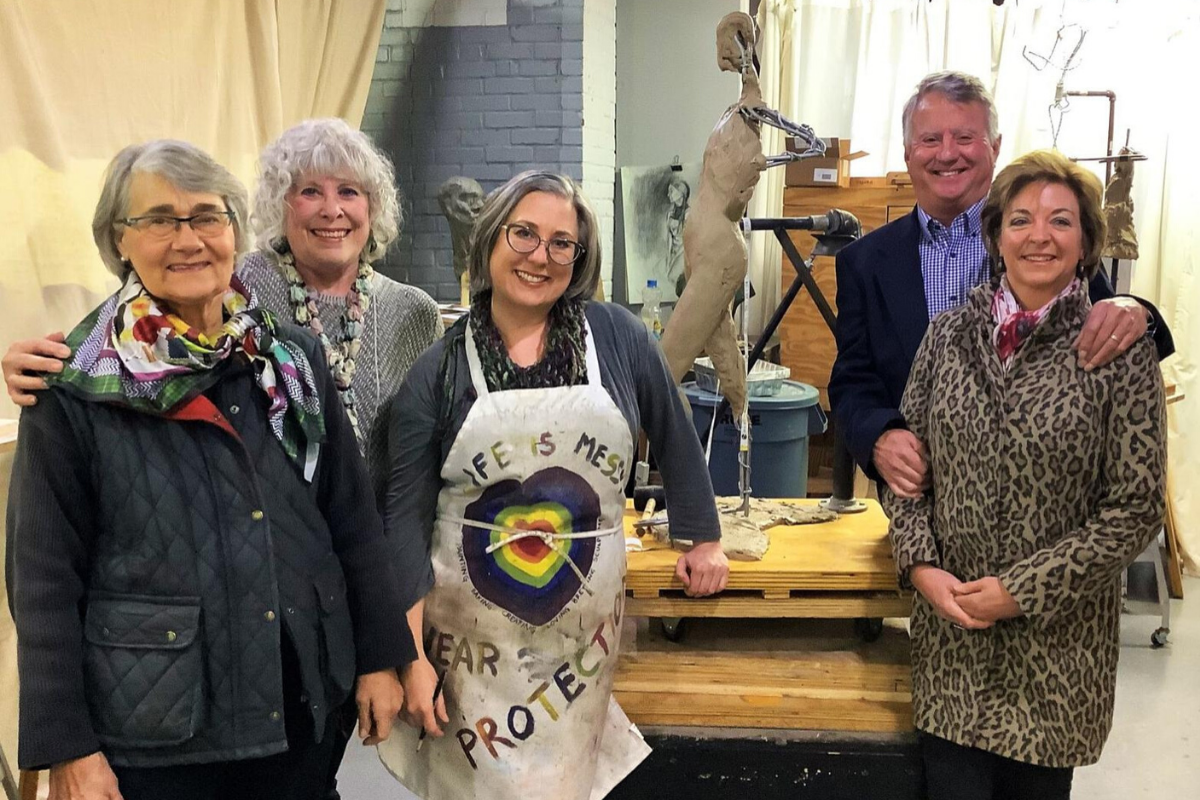 Pictured, from left, in the sculptor’s studio are: Linda Moran, chairperson of the Claire McCardell Project steering committee; Marilyn Bagel, club president; Sarah Hempel Irani, the sculptor commissioned to create the sculpture; and Renee and Marvin Ausherman, trustee and chairman/founder of AFF, respectively. 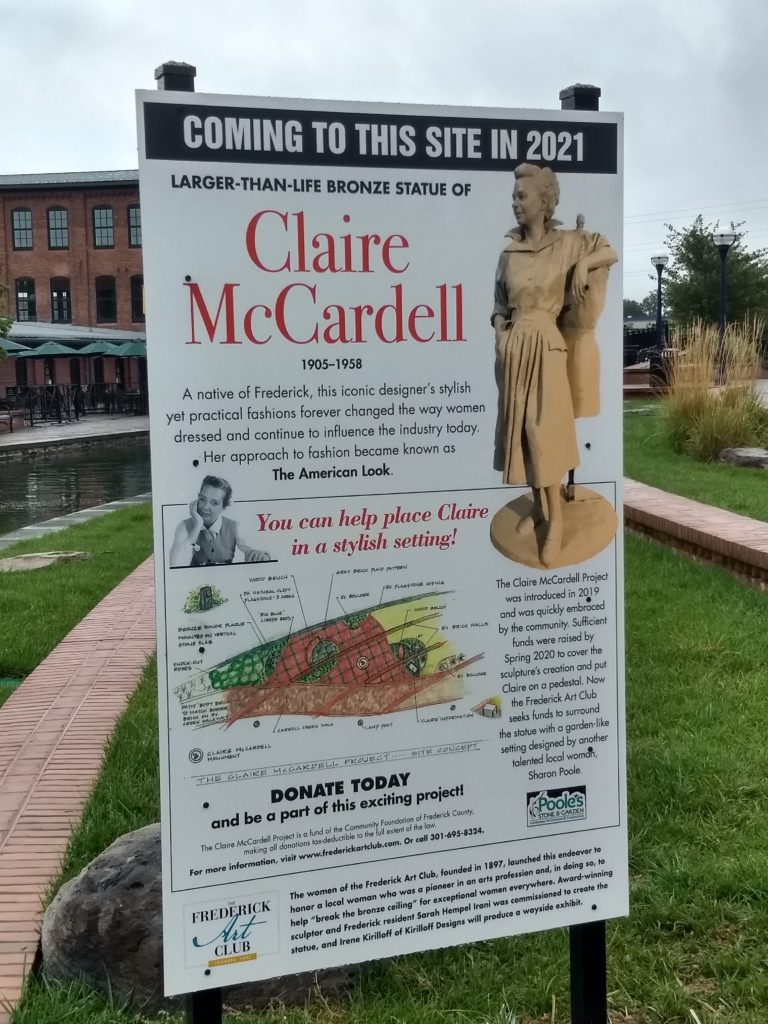 Coming soon sign for the Claire McCardell Project located at the east end of Carroll Creek Linear Park scheduled for unveiling in 2021.

Courtesy of The Frederick Art Club

“We are thrilled,” says Marilyn Bagel, president of The Frederick Art Club. “This level of support from such a major foundation tells us our vision has real meaning and purpose in the community. Claire McCardell was a pioneer. She was an artist and a business leader in the 1930s, 40s and 50s, when few women were able to receive recognition for their success. She revolutionized women’s fashion. We want to put Claire on a pedestal here in her hometown, and the Ausherman Family Foundation has just moved us much, much closer to doing that.”

Linda Moran, chairperson of the project steering committee, calls the AFF grant “beyond our expectations. Our next challenge is to achieve the $20,000 match. We’ll be seeking contributions from, nonprofits, businesses, and individuals who want to help define local history in a way that inspires a sense of pride and raises up an influential woman.”

The Claire McCardell Project is a fund of the Community Foundation of Frederick County, making gifts to the fund tax deductible to the fullest extent of the law. Donations are accepted electronically at www.FrederickCountyGives.org/McCardell.

The Claire McCardell Project calls for installing a 7 ½ foot bronze statue of McCardell in a prominent location at the east end of Carroll Creek Linear Park in downtown Frederick. The approved site overlooks the creek, with McCutcheon’s Apple Products to the south, the restored United Knitting Mills building across the creek to the north, and the Galleria Fountain just to the west. Award-winning sculptor and Frederick Art Club member Sarah Hempel Irani has been commissioned to create the statue. She unveiled an 18-inch model of the sculpture at the launch event. Kiriloff Designs, based in Frederick, will design an accompanying wayside exhibit that will tell McCardell’s story.

The club is gearing up now for a ticketed benefit on the evening of November 6 billed as “Women Wild for Claire.” Registration for the event, sponsored by PNC, is open now. Visit www.frederickartclub.com/claire-mccardell-events.

About Claire:  Claire McCardell (1905-1958), who grew up on Rockwell Terrace in Frederick, became internationally credited with creating the American Look in sportswear. Her iconic designs defined decades of fashion and continue to influence the industry today. Among many honors, she received the Coty American Fashion Critics Award, appeared on the cover of Time Magazine in 1955, and was named one of the most influential Americans of the 20th Century by Life magazine. Her work is held by the Metropolitan Museum of Art, the Fashion Institute of Technology, the Maryland Historical Society and Heritage Frederick, among others. She is buried at Mt. Olivet Cemetery.

To Contribute: The Claire McCardell Project is a fund of the Community Foundation of Frederick County, making all gifts tax deductible to the fullest extent of the law. To make a gift, visit www.FrederickCountyGives.org/McCardell or mail  a check to The Community Foundation of Frederick County, 312 East Church Street, Frederick, MD, 21701 with “Claire McCardell Project” noted in the check’s memo line.

About the Art Club: Established in 1897, the Frederick Art Club is one of the nation’s oldest art clubs. Initially a small league of women art students, it evolved into a Frederick institution with the long-standing mission to teach and practice art, enlighten members, and generate an appreciation of the value and beauty of art in the broader community. Today, the club has nearly 100 members and has taken on the Claire McCardell Project as its gift to the local public art landscape.